Compact fluorescent light bulbs (CFLs) are the spiral coiled light bulbs becoming more popular with consumers for their efficient use of energy and longer-lasting alternative to the century old incandescent bulbs. An average incandescent bulb lasts about 800 to 1,500 hours; a CFL can last as long as 10,000 hours. Replacing an incandescent bulb with a CFL saves over 50% in energy usage, which results in the preventive release of billions of pounds of carbon dioxide into the atmosphere from power plants each year according to the U.S. Environmental Protection Agency.

CFL light bulbs could actually hurt the environment if not properly disposed of when they burn out or break. Each CFL contains about 5 milligrams of mercury gas (barely enough to cover the tip of a pen), light is generated by heating the gas in the glass tube. The mercury in CFLs is safe when contained, but if a bulb should break or be disposed of improperly CFLs can become unsafe. It is highly recommended that the following steps take place: 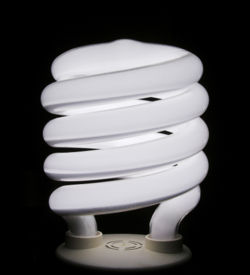 If a CFL Bulb Breaks

Follow the process below from the U.S. Environmental Protection Agency:

Cleanup Steps for Carpeting or Rug

Future Cleaning of Carpeting or Rug


If a CFL Bulb Burns Out